IQ (Intelligence Quotient) is a quantitative assessment of the human intellect level: the level of intelligence relative to the average person of the same age. It is defined by special tests. Simply speaking, the IQ test measures your ability to solve problems and reasoning. The average score of this test is 100 points.

There are various tests analyzing your visual and mathematical skills, knowledge of the language, memory, concentration and so on all over the world. They are created by qualified psychologists and specialists. In conclusion, you get a score-a score of your abilities.
According to the talented expert Mensa Lisa Van Gemert, people with a high level of intelligence can control this world and manipulate people much better than others.
IQ is really a test with the help of which you can compare yourself with other people.
Estimates can usually be found on the curve of the bell: 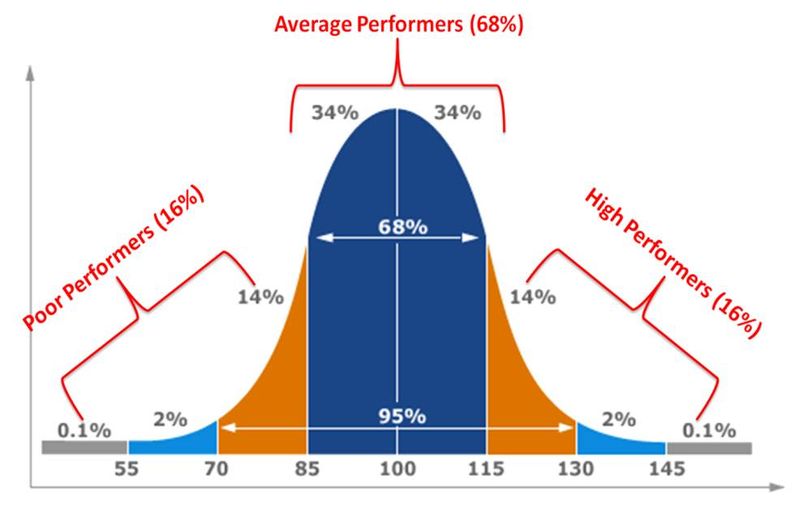 What does it mean?

In fact, the IQ indicator measures your mathematical, language and visual abilities as well as your memory and information processing speed. It doesn't show your charisma or creativity. This information is provided by Richard Nisbett, a professor of psychology at the University of Michigan. Of course, one can not determine emotional willingness with the help of it .
Maybe, as a five-year-old child, you can read and understand modern economical magazines. But are you ready to deal with the stories of war-torn countries or prisoners on death row?
You do not need to look at your child as nothing more than a brain. Each child is an individual, with his own thoughts and inspiration. Like any feature - blue eyes, big legs - their IQ is only one part of who they are.

Your IQ can change over time

A huge number of factors can affect your IQ rate. For example, stress or hunger. It was found out that children from not well-to-do families adopted into a middle-class family often increase their level of intelligence by 15-20 points.
In fact, heredity is not so important, but environmental factors.
In one study, 33 teen intellects had been testing for 4 years. Some of their IQ scores ranged by more than 20 points. Changes corresponded to structural and functional changes in their brain.
Experts say that children being geniuses at the age of 2 rarely remain so.
In other words, it's easy to notice a 3-year-old genius, reading at the fifth grade level and speaking Spanish fluently. But how to make a genius from a 47-year-old man? What is going to distinguish him, making him more intelligent?
Read about the best methods in How to increase your IQ level article.

You're smarter than your ancestors

Our generation is smarter than its ancestors.

At a time when IQ tests were first standardized (1990), researchers noticed that an intelligence rate is growing with each generation. Thus, an 8-year-old boy today would score more points than an 8-year-old one a couple of years ago.
It does not mean that our brains are more special. This means that our ability to think and solve complex intricate tasks has logically improved.
This is called Flynn's effect. We have learned a lot: new classifications, improved training programs, acceptance of hypothetical situations. Our ancestors did not think so deeply. They talked about what they saw before them.
There has been a change in the market of professions. At the moment, the percentage of companies and works, where we need to solving complex, hypothetical problems has increased, whereas previously this percentage did not exceed 3%. We have used to face difficulties.

Health factors may also have had an impact. Studies have shown that immunization rates at an early age are a large predictor of the average IQ in the country. Thus, the reduction in infectious diseases worldwide may be due to a general increase of IQ in subsequent generations.
If a person develops both brain and struggles with infectious illnesses — it is twice difficult for him. However, it strengthens our next generations.

It's not necessary to be a genius

The guarantee of success is not in the level of intelligence, but in perseverance, work and the desire to achieve success. If you do not have such qualities, then it's unlikely that high level of intelligence will help you. Specialists recommend spending as much time as possible with children, reading books and developing them.
So develop your good habits an strong work qualities and don't waste your IQ level!